Trending
You are at:Home»Έρευνα και Ανάπτυξη»Looking the future for a better health: how nanomedicine can help

ABSTRACT
With the advancements of science the adjective “small” in units changed dramatically, going from macro to micro in the last century and now it is time for nano-dimension.
What does it mean for future health?
Dimensions of living organisms can be measured in micron (for example, 2.5 micron for a bacterium, 6-7 micron for a human red blood cell) but now, going to nano-scale, life can be seen at molecular level, which means to understand primary levels of organization and interactions, involved in all processes of cells and organisms. The advantage is to individuate what are optimal conditions or pitfalls for functioning and intervening with corrections or solutions at this level.
Research in nano-medicine is in constant progress to give healthcare solutions and new diagnostics at nano-level.
The nano-approach has opened a lot of opportunities that it is impossible to describe completely in a brief article. I will highlight research results and keywords in the area of drug delivery, which have already shown their importance for health applications.

Nanomedicine is a branch of nanotechnology mostly devoted to health. Nanomedicine research is the result of multidisciplinary teams, made by chemists, biochemists, molecular biologists, analysts, together with material scientists, engineers, medicinal chemists, pharmacologists and physicians. In the last two decades nanomedicine have attracted significant attention from both academic and industrial sectors, devoting its core research to the integration of nanomaterials with biology, in particular to innovate the field of drug delivery. In fact, improving drug delivery systems to obtain the best cell response is an important scientific advancement to defeat diseases, by increasing therapeutic efficacy with concomitant reduction of side effects of drugs.
The innovation in drug delivery using nano-devices came from two main observations: (i) the pitfalls of passage via blood stream, where drugs can be enzymatically deactivated before reaching the target, and (ii) the natural passage of drugs through cell membranes of vascular tissues in order to be distributed in tissues and have their pharmacological effects at target cells. The idea of a drug envelope, such as a small lipid vesicle of a few nanometers of diameter, was also inspired by natural vesicles made of phospholipids and present in blood stream, that could solve the need of a “protective” shell to improve resistance and bio-distribution parameters.
It has to be acknowledged that the idea came first to Greek scientists that gave inspiration for such vesicles called liposomes. In 1973 Gregory Gregoriadis reported the first liposomal-drug formulation [1], establishing the concept that liposomes could entrap drugs and be used as drug delivery systems [2]. Demetrios Papahadjopoulos developed the preparation of large unilamellar vesicles (LUV), with improvements in trapping efficiency and homogeneity, which could change the in vivo distribution of entrapped drugs [3,4].
Nowadays, the definition of lipidic nanoparticle (LN) expands that of liposome, which indicated its composition made of natural phospholipids [5]. LN drug delivery has become an established technology platform and has gained considerable clinical acceptance. Technical advances have been proposed, such as: remote drug loading, extrusion for homogeneous size, long-circulating (PEGylated) liposomes, triggered-release liposomes, vectors containing nucleic acid polymers, ligand-targeted vesicles and nanocarriers containing combinations of drugs. Nanomedicine formulations are now routinely used such as (size): polymer- or protein- or antibody-drug conjugates (3 – 15 nm), dendrimeric drugs (5 – 50 nm), polymeric micelles (20 – 80 nm), liposomes or PEGylated liposomes (5 – 150 nm) and organic / inorganic colloids (20 – 200 nm). For all types of drug delivery systems, it is needed to achieve optimized properties such as drug loading and control of the drug release rate, long-circulating of nanoparticles, intracellular delivery of drugs, triggered release and clinical development. It is worth mentioning that the toxicity associated with man-made nanomaterials is not yet widely studied and now is associated with the emerging field of nanotoxicology.
Numerous clinical trials in diverse areas such as delivery of anti-cancer, anti-fungal and antibiotic drugs, gene therapies, anesthetics and anti-inflammatory drugs, represent some of the successful examples of this nanotechnology applied to medicine. LNs are the first nanomedicine delivery system that went from concept to research and clinical applications, and they provide an established technology platform with considerable clinical acceptance.
We can look forward to many more clinical products in the future that successfully address the therapeutical success with low toxicity and costs. In this respect, the new perspective of cell membrane interaction with LNs for drug delivery has been brought into nanomedicine research, and membrane lipidomics can represent a new tool for profile investigation and personalization of the therapy [6].

New perspectives in drug delivery field are coming from two other systems:

(i) Polymeric Micelles (PM) studied to improve the delivery of hydrophobic drugs [7]. Many different PM formulations have been designed and evaluated over the last years, and some of them have steadily progressed through clinical trials. Core-crosslinking is among the most popular methods to improve the in vivo stability of PM. Core-crosslinking of PM and covalent drug attachment in PM, have clearly demonstrated to improve bio-distributional profiles in preclinical studies.

(ii) Red Blood Cells (RBCs) studied as the first cells which naturally acts as biological drug delivery system, when drugs are in the blood stream [8]. Biological drug delivery systems have acquired more importance from the point of view of biocompatibility and utilization of natural mechanisms for transport, localization and responsiveness to factors of microenvironment in the body. This is not really a nano-delivery, since the average dimension of RBC is 7 micron. RBCs are vascular carriers designed by Mother Nature, as natural delivery cargoes for oxygen throughout the body and circulate with a mean lifetime of 120 days. They do not have organelles and loose DNA in the first month of their life, so that it can be considered their inner volume and extended membrane surface to carry substances, without interference of endogenous metabolism. It is also possible to link some components to the surface of antigens present in RBC, constituting another point of loading of the desired drug, via chemical or supramolecular interactions. Research started some decades ago highlighting RBC as interesting field that brings together cellular therapies and nano-technology. However research is now addressing several issues of delivery and particle engineering that, together with regulatory challenges and operational cost, have to be encompassed in order to bring this delivery system to nanomedicine applications.

Last but not least, other subjects that are very promising in nanomedicine can be mentioned, such as: metal nanoparticles in biological systems, used for drug delivery or vaccines, as well as for improving diagnostics imaging, and nano-devices that are improving also diagnostics as well as surgical treatments.

It is expected that nanomedicine will impact nearly every medical specialty and unveil new ways to improve the quality and extend the duration of life in healthy condition. It is also important that researchers of all disciplines collaborate to bring the best innovations to application. It will certainly require the innovators to cooperate with public health bodies in order to address all the challenges of bio – and environmental compatibility and safety, as well as to find out the best cost-effectiveness, which are crucial elements to bring solutions for global health. 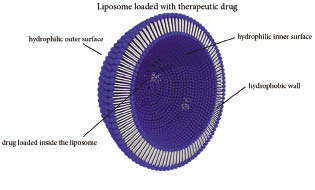 Biographical Sketch
Dr. Chryssostomos Chatgilialoglu (born 1952), former Director of the Institute of Nanoscience and Nanotechnology at NCSR “Demokritos” (Athens), holds a permanent position as Research Director at Consiglio Nazionale delle Ricerche (Bologna, Italy) since 1991. He is a world-recognized expert in free radicals and in the last decade his research focused on biosciences, biomarker discovery and membrane lipidomics as diagnostic tool for personalized therapies. He is the author or co-author of more than 250 publications in peer-reviewed journals, 34 book chapters and 6 patents. Author and editor of several books, including Encyclopedia of Radicals in Chemistry, Biology and Materials, Wiley 2012; Membrane Lipidomics for Personalized Health, Wiley 2015.